Earned media, in a nutshell, is a trendy way of saying “publicity.”

More precisely, it’s unpaid brand coverage that originates outside your organization. This might include:

This is in contrast to:

Many marketing strategists would have you believe that earned media is the “Holy Grail,” of content marketing. They’re not entirely wrong – it has value to any content marketing campaign, and in a sense, it’s your end goal.

But in the same sense that receiving a medal is the end goal for running a marathon. The medal might be motivation for competing, but it won’t physically help you reach the finish line.

“Running the marathon” in this analogy is generating owned and paid content. The earned media is your medal. And yes, earning a medal boosts your credibility as an athlete, just as this type of media boosts the credibility of your brand.

But in marathons and in content marketing, you have to be willing to put the work in first to get your due prize (if there’s only one thing you take from this post, let it be that).

What’s so great about earned media?

Audiences (especially B2B) are usually aware when the message is controlled by brand marketers and tend to be more receptive to brand coverage when it comes from an impartial column writer, a post their peers share on social media or reviews on Tripadvisor, for instance.

These trusted media sources are generally called “influencers” since they’re speaking from a position that makes an audience inherently more likely to listen to them. They don’t necessarily have to be famous; they just have to be someone your audience trusts (existing customers, reviewers, news sources, etc.). The point of word-of-mouth marketing is to get these influencers talking about your brand. If you succeed, you “earn” media.

But earning media isn’t all sunshine and rainbows. While it’s free on paper, in practice it actually costs time, effort and money to cultivate, and it’s really difficult to measure return on investment (we’ll get into that later in this post).

Secondly, it’s really great, except when it’s not. Case in point, this is earned media:

HELP ME PLEASE. A MAN NEEDS HIS NUGGS pic.twitter.com/4SrfHmEMo3

Unfortunately, so is this:

“Yo Kendall, im gonna need you to come through with a pepsi, these cops are wildin” pic.twitter.com/dOpKnTq8LU

Simply put, not everything you earn is necessarily good.

How to craft a winning converged media strategy

The CliffNotes version of your earned media strategy is this: Identify your influencers and convert them into advocates who improve brand awareness for you. Obviously there’s a lot more to it in practice.

For starters, earned media doesn’t live in a vacuum. In fact, with the notable exception of Tesla, we can’t think of a single company off the top of our heads that uses this strategy exclusively. Even Apple, the world’s most profitable organization, generates content and pays for advertising.

In other words, “earned media” is not the buzzword you’re looking for. That would be converged media and it looks like this: 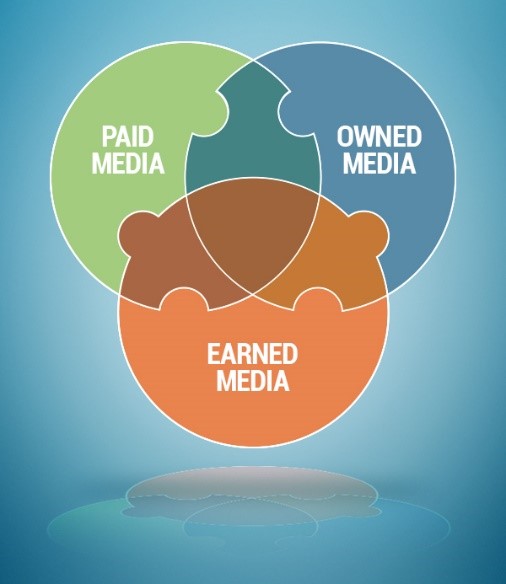 As you can clearly see, earned, paid and owned media overlap with one another. Your paid media (ads, PPC) might be how you promote your owned media (blog posts and gated collateral). In this sense, earned media follows paid and owned media, assuming you take steps to get your content promoted by users and other influencers – which is kind of a must in today’s marketing landscape.

“In a world where there is a content surplus and attention deficit, it’s critical to surround-sound audiences with all forms of content – earned coverage, influencer, owned content (white papers, blogs, etc.) and social (both paid and organic),” Brito told Brafton.

And increasingly, businesses are wisening up to the fact that they can strategically encourage people to speak on their brand’s behalf. 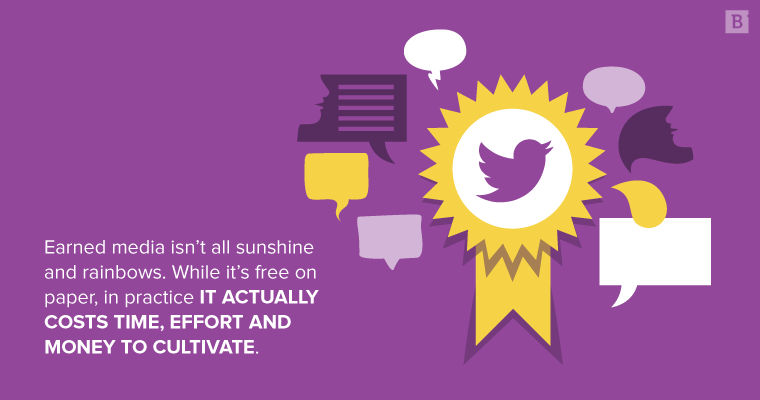 The hard part is figuring out how to do that. It will take some trial and error, but here are a few great starting points:

Her very prudent advice is to become an influencer yourself. If you create original, shareable content that resonates with your industry thought leaders and your target audiences, and you do this on a continual basis (which by the way, Hunt argues is much, much cheaper than just paying influencers outright), you can build a sort of positive consensus on the web about your brand.

And if you can do that, you can start to earn media from even the most objective, impartial parties (e.g., journalists).

Search Engine Journal’s Ben Jacobson explained the concept to Brafton like this:

“Publishing a link-worthy resource on your own media properties can help journalists to feel like your message has weight. In this sense, owned media can serve as a type of social proof that reduces friction on the path to landing earned media. The more your published pages convey a sense of authority and trustworthiness, the easier your journalist outreach efforts will be.”

A brand’s PR people will still need to actively solicit media coverage through active influencer outreach, by using press releases to amplify company update announcements. But the bottom line is that influencers are much more likely to listen if they’ve heard of you and they appreciate the trustworthiness of your content:

“Many brands are creating their own newsrooms, hiring ex-journalists and writers and creating online experiences that replicate that of a news outlet,” Brito said. “On the consumer side, Reebok does an amazing job with their newsroom, as it’s fully integrated into the e-commerce and corporate site. On the technology side, Microsoft’s newsroom is best-in-class for a lot of reasons.”

You might call this content marketing, digital marketing, top-of-funnel marketing, and so on and so forth. But at the end of the day, it all fits under the umbrella of owned media, and all of it is vital the for the development of earned media.

According to the Content Marketing Institute, 81 percent of businesses use live events in their content marketing strategies, and 75 percent consider them effective. Beyond that, events are earned media goldmines for several reasons:

You’ll need to distinguish your presence somehow. If you have visually interesting products, display them. If you’re more service-oriented, make sure your presentations are backed up with visually engaging content (slideshows, graphs, infographics, etc.).

Be clever. One of our clients who manufactures data center power strips set up charging stations at an industry conference, delivering a product demo and some much-needed smartphone juice in one maneuver. Another raffled off an all-expenses paid trip to their Florida headquarters.

Your goal is to be remembered, so do something memorable.

With earned social media, your goal is to get them having their own discussions, not necessarily just responding to you post by post. Nothing is more effective in this regard than the good old-fashioned user-generated campaign.

Consider the example of a John Deere campaign, which encouraged fans of the company to Tweet their stories. The post below got 27 retweets and 65 likes:

At home on the range. #DeereSighting by Michelle M. pic.twitter.com/xfmmk5LvGL

In some cases, starting a good conversation is just a matter of being attentive to your social channels.

For example, when @carterjwm tweeted Wendy’s asking “how many retweets for a year of free chicken nuggets,” the fast food enterprise responded with “18 million.” And so began the #NuggsForCarter campaign on Twitter. Imagine if the social media manager had snoozed on that one.

Other times, being dominant on social channels requires some creative muscle, aka, well-produced content whose value speaks for itself. Case in point, this highly entertaining B2B video case study, which has nearly 1 million views on Youtube:

(And several funny comments, to boot. Our favorite is “Slack makes me wish I actually had a team, so that I could use it.”)

So, where does that leave you?

Clearly, with a lot to think about.

And to avoid making this leviathan of a post any longer, we’ll leave you with a final thought:  measuring earned media’s ROI. Sure, if your recent video production goes viral and your lead count increases, that’s clear value.

Another decent indicator is impressions and engagement metrics on social media. This is a great way of confirming that at the very least, you’re starting relevant conversations with potential influencers and driving up total conversion opportunities (even if at a high level).

In cases where leads didn’t come in through any apparent point in your sales funnel, you can just ask the question: How did you hear about us? It’s possible one (or many) of your influencers put them on the fast track to conversion.

But if you want to get really scientific about it, Brito recommends using reporting and analytics tools like NewsWhip and TrendKite to track the performance of your earned and converged media campaigns.

Even then, earned media is a bit of a wildcard in that won’t always know which part of the funnel it will bring your leads to, which makes it difficult to track. Still, numbers have a way of telling a story, and the answers may lie in your residual dividends.

All we can say with certainty is this: You won’t see ROI on earned media until you see ROI on your owned and paid media.

Unless you’re Tesla of course, in which case, we can’t wait to see what you blast into outer space next.

You're subscribed! Look out for a Welcome email from us shortly. If you don’t see it, check your spam folder and mark the email as “not spam."

A Guide to Every 2022 Google SERP Feature (Infographic)

SERP features make it easier for users to get exactly what they need so they can take the next step as quickly as possible. 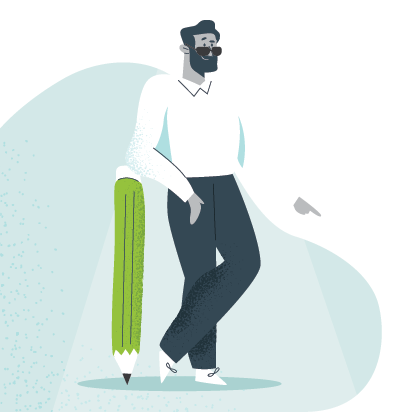 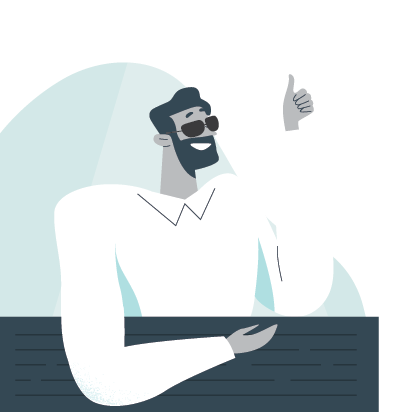 Keep an eye out for a welcome email from us shortly. If you don't see it come through, check your spam folder and mark the mail as "not spam."